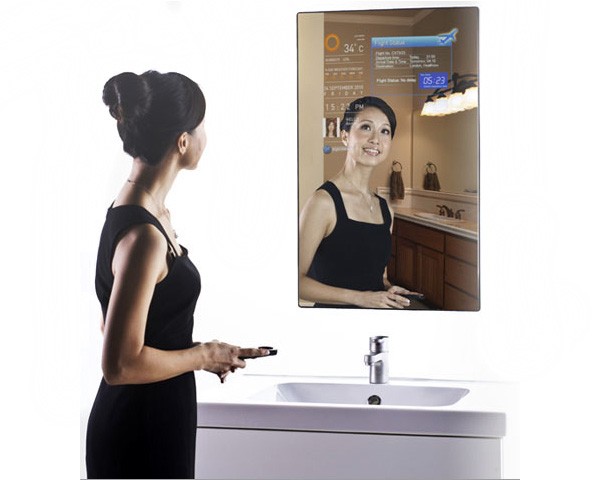 I have seen many Magic Mirrors on Coolest Gadgets here before. This Cybertecture Mirror is the only one that isn’t a concept.

This Cybertecture Mirror, designed by James Law, has a translucent overlaid interface and measures 800 x 500 x 50 mm. It has fog resistant glass, IP41 waterproofing, WiFi, as well as some stereo speakers with 10 Watts of power output.

There seems to be some proprietary operating system functioning here, and allows the user to store all their data on the cloud, and access messages, weather, calendar, as well as other apps. The video after the jump even shows the Cybertecture Mirror used in conjunction with a scale.

You might also note that the user has a remote control for this mirror, but that could easily be controlled by a smartphone. In fact, it really ought to be. The last thing we need is another remote control, really.

I suppose that this really is the future, isn’t it? We get up, we go to the mirror, we check our messages and other things, and hop in the shower and think about what we just saw. Then, once we get out of the shower and get dressed, we can go online and get some work done.

The Cybertecture Mirror just launched in Hong Kong for a price of $7,773, and the company expects to sell two million years in the first three years. That’s quite a business goal.