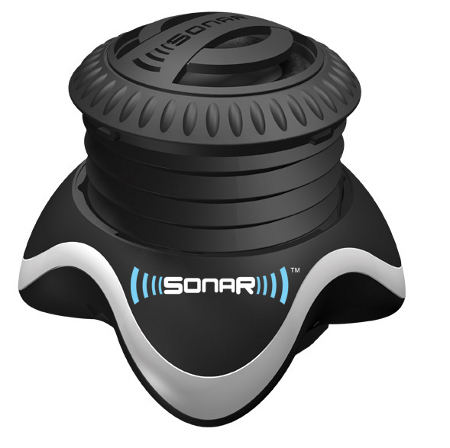 Looking for a spanking new portable speaker? Well, if you love taking the wireless route, you might want to check out the foxL v2 Bluetooth speaker that we looked at yesterday, but for those who want something which is a whole lot more affordable (the price will be discussed later on in the extended post), then you won’t go wrong with the Cyber Snipa Sonar Portable Mini Speaker.
As mom used to say – do not judge a book by its cover, and a No Fear T-shirt had this words emblazoned on it, “It is not the size of the dog in a fight that matters, but the size of the fight in the dog” – or something to that effect. Well, the same applies to this relatively tiny speaker, where it’s capability betrays its physical form factor.

Touted to be “shockingly powerful” where a portable speaker for mobile devices is concerned, Nathan Newman, Product Manager of Cyber Snipa has this to say about the Sonar Portable Mini Speaker, “We’re really proud of the speaker’s design, both in its looks and functionality. The Sonar Portable Mini Speaker is truly the premier speaker set for taking your mobile device experiences to the next level and simply blows away your standard speakers, whether you’re at home or lounging by the pool this summer.”
Relying on a patented vacuum bass system, the Sonar packs quite the punch and has a built-in rechargeable lithium battery that is said to last for a good 4 hours of non-stop audio playback before it requires another trip to the nearest power outlet. For those who want an even more tub-thumping experience, here is an idea – how about connecting multiple units in a daisy chain configuration?
And now, something which is close to everyone’s hearts – the price. After all, in the currently shaky economy worldwide, it makes sense if you want to obtain the best bang for your buck, and the Cyber Snipa Sonar Portable Mini Speaker can be yours for $29.95. Basically, it plays nice with just about any device as long as those support the 3.5mm audio jack.