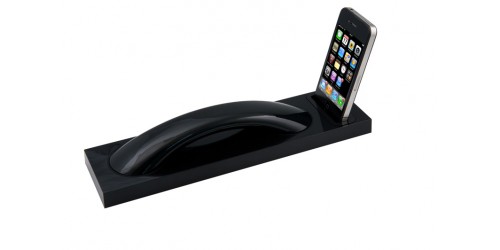 Most people love their iPhones, in some cases the cell phone has even taken the place of the house phone, at the very least most homes have remote phones, those wireless little bricks in varying degrees of gray colored boredom, with a few tedious ringtones and usually very few special qualities that would make one stand apart from another.
That is until now, award winning French designer Davis Turpin brings us another of his graceful everyday designs in his new Curve BT iDock. Now you can charge your iPhone and even sync with iTunes with this Bluetooth connected charger with an attractive, yet substantial handset that just begs to be cradled between your shoulder and your ear, just like in the good old days.The Curve also expands the connection radius at home by allowing you to place your mobile phone at the location with strongest signal strength, and leave it there while you move about.
The Curve has volume control on the handset, and a dedicated iPhone dock that will simultaneously charge your iPhone, even while you are using the wireless handset. The Curve will recognize up to 2 Bluetooth devices at the same time, including iPhone, iPad or Android, and it’s perfect to use with Skype, Google Talk or other VoIP services.
To answer the phone you simply pick up the handset from the base, and if at the time you would prefer to use your iPhone, just grab it off the dock instead, and proceed as usual, swapping back and forth between the two requires only a 2 second button press.
The Curve is has special features like the ability to play music from your iPhone through external speakers, or a stereo receiver. You simply need an audio cable (available separately) to connect with the relatively standard 3.5 millimeter stereo plug.
The Curve really does put your old remote phone to shame, and it can be yours for under 99 bucks at Amazon.com