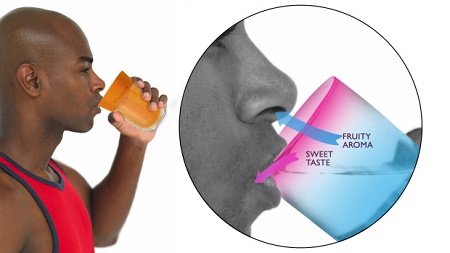 Our bodies, much like our planet, are made up primarily of water. That being said, it makes sense that we should be drinking enough of it to keep ourselves happy and healthy. The big problem is that other things like soda, juice, tea, and coffee taste much, much better. Just because water is an aspect of those drinks doesn’t mean you can skip drinking it by itself. Drinking everything but water is as solid an argument as saying you’re eating legumes by consuming vanilla bean ice cream. If you want to drink more water, but need help getting to a point where you can stand it in its flavorless form, then why not trick your brain into thinking it’s far more delicious than it is?

Putting artificial flavoring in your drink also means adding sugar, or using dyes that can be bad for the ole bod. The Right Cup uses the fact that your sense of taste is directly linked to to your sense of smell. This is a plastic cup that has been infused with food grade flavors so your mouth will get hints of sweet while your nose takes in the aroma of whichever flavor you picked out, making you think your water has a taste.

While this isn’t a coating on the cup that will wash away, the overall effect will wear off over a period of about six months. That being said, this would likely be a great way to wean yourself off of sugary drinks during that time. Handwashing is going to be the best method to try and preserve the flavor as much as you can. Two of these cups will cost you $49, and there are flavor options of mixed berry, orange, apple, lemon lime, peach, and cola might be an option down the road.