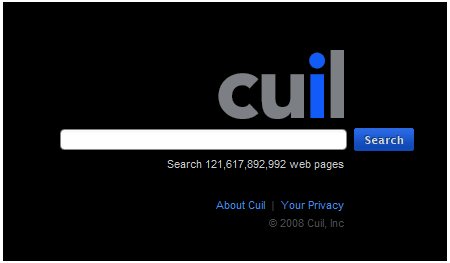 Google could end up bitten in the back by their ex-engineers as a group of them have founded a new search engine which is touted to cover three times as many Web pages compared to the monster known as Google. Man, and to think that we just celebrated the milestone of Google having indexed a trillion pages – it will be amazing to see how this start-up manages three trillion. The new company is known as Cuil Inc., will be launching it’s search engine today and hopes to deliver much better results compared to other major search engines. How does it do so? The answer lies in searching across more Web pages and studying them more accurately, leaving Yahoo! and Microsoft something to ponder upon. Perhaps they should now start talking to each other again about a merger if they are to survive the coming onslaught.

Cuil (pronounced as “Cool”) will have a results page that looks like that of an online magazine, taking a totally different approach compared to Google. I suppose this will appeal to the younger generation as they all love plenty of colors and attractions, but I would still prefer a text-based approach that Google takes since it loads pages much faster, albeit you might miss out on some images or have to perform a separate search query for the image required. Cuil will be based in Menlo Park, California, and will be the latest entrant in the search engine arena. It will be interesting to see how things shape up from here, and whether they can find a chink in Google’s formidable armor.

Cuil does not only look at the popularity of a web page, but also analyzes the concepts on the page as well as their relationships, grouping similar results under different menus. It will take some time before Cuil catches on, but as always, it will be the consumers who win with better competition. Time to offload that Google stock and pick up Cuil’s IPO when it is offered, eh?

1 thought on “Cuil from ex-Google engineer”