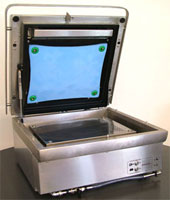 The lobster electrocuter is known as the CrustaStun. It has been designed to be used in a restaurant environment as it conforms to the highest standards. CrustaStun is so easy to use that even untrained staff can use it!

The reason why I like the idea of this is that I don’t like to think lobsters are boiled alive or are killed in any other inhumane fashion. As this machine is set to produce instant anaesthesia and will kill within 5 seconds, 10 seconds for lobsters and crayfish. I know it will die an instant death. It conforms to the standards of humane killing and acceptable to the general public.

Until now, sea creatures like the lobster have either been drowned in fresh water before cooking or stabbed to death. This sounds like a pretty messy method for sea food lovers. Another method is to put a lobster in a bag and keep it in the freezer for about 2 hours. They say the lobster loses consciousness and dies. But why bother waiting 2 hours when it can be done in seconds.

All that you have to do is place the lobster on a steel plate which is resting in a shallow pool of a sea-water concentrate(brine) and then close the lid. For safety reasons, there are specifically designed safety inter-locks. Simply press the button and the device will send an electric current through the lobster.

CrustaStun is a fast and efficient was of killing a lobster and as it reduces the stress that the animals goes through, the quality of the meat in terms of texture and flavour will be improved.

You never know, you could come back in the next life as a lobster – use CrustaStun. Available from and more info at crustastun.