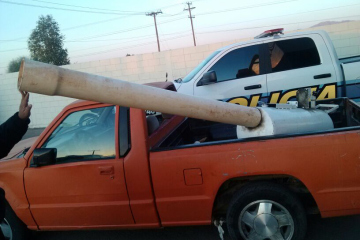 It is not every day where we report on lawbreakers and their cool gadget. We certainly don’t want to promote illegal behavior. But at the same time we love showing people’s creativity. US Border agents have recently found more and more large quantities of marijuana bundled up and sitting out in the desert. Dumb luck? Not exactly. A few years back National Guard troops in Arizona found a catapult near a border fence. So it was apparent that illegal substances were being launched across the border.

Last week Mexicali police found and seized homemade cannons – apparently used to launch drugs across the border. These crafty smugglers modified a car engine to compress air and then load parcels into a plastic tube to fire them across the sky. Estimates say that packages over 28 pounds could travel 500 feet when launched from this homemade ganja gun. The story certainly makes me scratch my head. You have to give them an A for creativity. And technically no one was carrying drugs across the border. But what do you suppose is next, carrier pigeons?