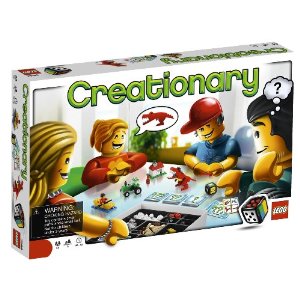 I’m sure that most of you have played Pictionary at least once in your life, the game where you must draw something while your team struggles to guess what it is. In case you have ever longed to play this game with Lego bricks, Creationary is your chance.

Creationary is one of several board games that Lego has out before the holiday season, and most of them have “buildable Lego dice and changeable rules”. In the case of Creationary, the player must build something in Lego bricks while others guess what it is. There are three levels of difficulty, and four categories: vehicles, buildings, nature, or things.

In all honesty, I’m not certain why someone didn’t market the idea of Creationary before. Perhaps someone didn’t think you could build something in Lego as fast as you could draw it. I believe Pictionary has an hourglass for about three minutes of time, but I’m guessing that there are some adults who couldn’t build a simple Lego tree in that amount of time to save their life. Perhaps you can arrange it so you play against the Lego Factory Project 2.0 that we reported on yesterday. I’m pretty certain the Factory would not be able to finish in three-minutes time.

Something tells me that Pictionary will top a lot of gift lists this Christmas. You can get it for about $34.99 on the Lego site.