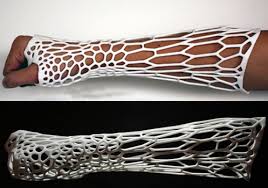 It happened again. I took a walk around the lake, and saw a little boy sitting in the sand, lathered up with sunscreen, with a big bulky casts on his arm. He was begging his mom to let him cover it in a plastic bag just so he could take a quick dip in the cool water. She was patiently trying to explain why that wasn’t going to work. I felt so bad, his whole summer practically ruined by a broken bone. There should really be some other way.

If you have ever actually broken a bone yourself, you know how awful it can be. The itchiness, the heat… heck, the smell! But check out what Victoria University of Wellington graduate Jake Evill is trying to bring to the table with his (conceptual) Cortex cast. This specialty cast would be fitted for a specific individual, and even for the specific kind of fracture, based upon the x-rays and scans of the injury. The resulting 3D printed, nylon, ventilated cast would offer a fabulously open design, that could be worn under clothes, showered in, and to the relief of summer-broken-bone-sufferers, “scratch- able”.

The Cortex cast would be 3D printed on site, which, at present, could take a few hours (with some additional time for it to cure appropriately) and would snap in place with specialized clips that could only be removed in the doctors office. This super thin, hygienic, and quite attractive cast-alternative could put smiles on the faces of adults and children alike, who have had the misfortune of breaking a bone, whether it be summer, or any other time of the year. The concept is certainly very appealing to me, as simply being able to take a real shower and having a good scratch would have been pure heaven during my last convalescence, but where the heck are all my friends going to sign it?