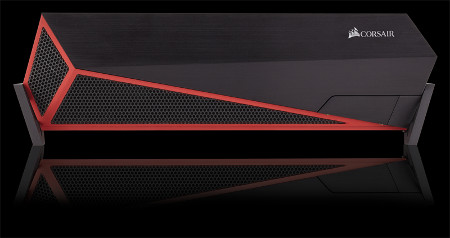 Gamers are extremely serious about the kind of hardware that they use, which is why it does not come across as a surprise of sorts when we hear of gamers working on a brand new gaming computer from scratch, where they place whatever piece of hardware that will offer them the very best bang for their hard earned buck, hoping to get whatever performance gain (perceived or otherwise) over their in-game opponents. Of course, getting all of those parts to work together in tandem can be a bit tricky at times, since there has been instances in the past of hardware not wanting to play nice with one another. However, you can more or less rest easy knowing that there are some rigs that have been built just for gaming by companies, and Corsair is one of them. In fact, Corsair has just unveiled their Bulldog, which has been touted to be the first DIY PC built exclusively to bring the vivid immersion of 4K gaming right smack in the living room.

The Corsair Bulldog is made up of a DIY kit alongside a stylish gaming console-sized chassis, a liquid CPU cooler, power supply, and motherboard, and there is more than ample space left in the design that will pave the way for customization and upgrades as and when required. With the Bulldog, users would have the perfect foundation to build the ultimate living room PC. Thanks to its proprietary liquid CPU and