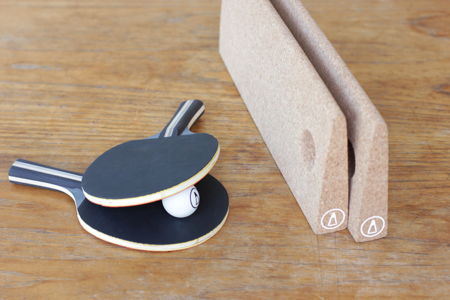 While a game of table tennis might not be appealing to everyone, it is still a sport that requires plenty of precision and fast reflexes, with fictional American champion Forrest Gump being the epitome of what the complete table tennis player ought to be. Also known as ping pong, this is a game that can be played casually as long as you have two bats, a rectangle table, and a net. Or something that might double up as a net, such as hardcover books or the ilk. However, those are not that common to come by randomly, as not all homes have a collection of books, let alone hardcovers. This is where the CorkNet comes in then.

The CorkNet has been specially designed to work on any table, thanks to its combined length is 80cm, allowing you to enjoy a game of ping pong on just about all tablets. It is also freestanding in nature, so you need not worry about scarring whatever expensive mahogany table. Then again, if you’re so worried about spoiling the table in the first place, it does not make sense to play ping pong on it since a wayward movement of the bat might result in a dent or scratch.

Basically, the CorkNet can be taken just about anywhere, and it also doubles up as a trivet in the kitchen. Right now, the CorkNet remains a Kickstarter project which needs your support to end up as reality.