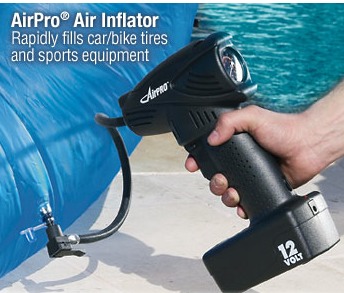 At the pool these days, you’ll find kids riding these crazy looking inflatable tubes, rafts, loungers, and all sorts of other things you’d never expect to see. Now, if you’re the parent of one of the kids who owns those crazy inflatable things, it’s going to be your job to keep them inflated. Don’t even bother attempting blowing it up by yourself, that’ll take a good hour. You could use a pump at home, but then you have to get it in the car and drive with it, which is a dangerous task in itself. Anyway, my point is, and sometimes it’s nice to have something portable that you can take with you on the go. That’s exactly what the AirPro is, a cordless air compressor/pump.

The AirPro (120 psi) has a 15″ air hose that can be used for inflatable toys (as I said), bike tires, car tires, sport balls, and anything else that needs inflating. There’s also a analog gauge that will tell you how much air you already have in there as well as two LED work lights in case you’re working in the dark. Another nifty built in feature is the top compartment which houses the different nozzle adapters (which let it fill bikes, cars, balls, tubes, etc.) so that you don’t have to carry them around with you.

The power for this thing comes from the 12 volt DC battery pack. With the AirPro itself, you get the battery pack and a charger. The product page doesn’t mention how long a charge will last you or how long a recharge will take. I wouldn’t expect anything earth shattering though.

$60 buys you the AirPro, a battery pack + charger, and the adapters for filling your bike and car tires, inflatables, and sports balls. That’s not to bad.