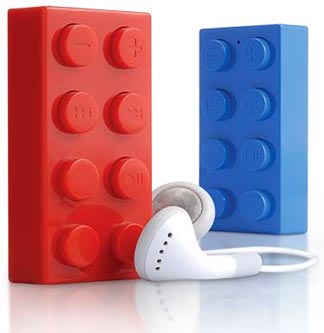 Sure, it doesn’t have a widescreen multi touch interface or an accelerometer that can change the image depending on which way you turn it, but it looks like a LEGO, man! Can an MP3 player be any cooler? At least in the “shuffle variety?”

It looks just like those infamous, overpriced bricks from Denmark that kids just love to build with . Buttons are incorporated into the design as the nubs that would work to interlock the blocks in an actual Lego. There are volume, pause, play, forward and backward controls as well as an on/off button. Primary colors of blue, red, yellow, green and white are available and work on a built-in rechargeable Li-ion battery for up to 6 hours of play time. There is no on board memory, but songs can be stored on microSD cards up to 2GB max. 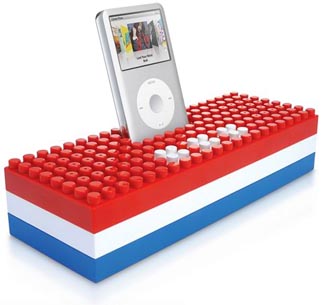 For those who already have their iPod, there is a cool Lego like stereo dock which has stereo speakers, all applicable buttons and a variety of colors. Cost is $40. And for those on the go but without a pair of headphones, there’s a Lego-esque plug-in speaker set which comes with volume controls built into the lego in a similar fashion … $16.99.

Too bad there isn’t a Lego version from Bug Labs.

Hat Tip: Homeloo via The Giz