Again, the last few days were pretty tumultuous in the mobile world. Google themselves have first thrown the ‘where’s my gPhone’ question, only to reveal the Open Handset Alliance and the Android embedded operating system. Then, there have been reports of companies adopting the OS, of others refusing it. Also, the iPhone’s getting locked up yet again, and rumor has it that they (Apple, that is) are preparing to release a tablet. Last but not least at all, Nokia shows off a new tactile touchscreen technology which claims to realistically emulate the press of a button.

Read on for some more details, and quite a few links

Sooo.. Given my love for most of the things Apple, let’s begin with them. And, of course, the iPhone. Well, version 1.1.2 of their Darwin OS is awaiting release, and the UK iPhones will come preloaded with it. It does add a few fixes and new facilities (Rumor has it that there’ll be an external memory mode – allowing you to use the iPhone as a flash memory stick that is, and a voice recorder). But what’s not a rumor is that it will re-lock jailbreaked 1.1.1’s, and that it will of course stuff the exploit that allowed for the jailbreak in the first place.

Now for another interesting rumor: Asus, are said to have confirmed an upcoming iTablet or whatever it’ll be called. Asus have worked with Apple on MacBooks, in the past. 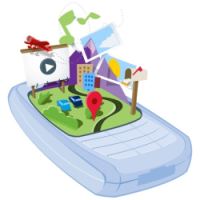 Then, there’s Google. They cleared all of the gPhone rumors and mystery by introducing the OHA or Open Handset Alliance, with pretty many mobile technology companies (Tech providers, manufacturers and operators – the list is right here, and presented Android.

Android is a new, open operating system. Based on a linux kernel (what else), it guarantees a very stable environment for all the applications. Following Google’s mentality, applications will not only be able to access all of the device’s functions, but also to seamlessly integrate with the Web. That’s good news, and very good news for those of us who have a flat data plan. Sadly, I’m sure that it’s not good news for the battery life.

Now, even if the information is still pretty new, there’s already a lot of debate going on. Why is that? Well, because the mobile operators aren’t that “open”-friendly. The open principle strongly opposes any operator’s philosophy of squeezing any available penny out of its customers. I’m pretty sure than Android will appear in very many flavors, created by companies, which will impose limitations aplenty: it will be very easy to change or add a few lines of code do that the device only runs applications bought from a certain operator, for instance. Thus, the door is open for lots of abuse. We can only hope that manufacturers and Google will manage to coerce the operators into not limiting the devices.

Some might now ask “What about all the operators who’ve joined the alliance?”. Honestly, I have no idea. It really appeared strange to me.. Why would tyrannic carriers join a venture that proposes to finally give customers the advantage?.. I really really hope that it will be open and that carriers won’t start removing bits and pieces of freedom.

Now since we’ve hit the subject of devices, apparently HTC will be the first to offer us one, somewhere in the first half of 2008. Palm, who’ve been trying to create their own linux-based mobile operating system but repeatedly failed to deliver, said they wouldn’t be switching to Android. They will, still, integrate Google applications in their devices.

Surprisingly, Nokia haven’t ruled out the options of using Android. This is at least weird, given that they’ve put a lot of time and money in developing S60 for Symbian. And they’ve achieved quite a lot, but more on that immediately. Anyway, they are not part of the OHA. Neither are RIM or MSFT. Very understandable, given that they already have a successful OS out.

Now back to Nokia. Just in case you didn’t know, S60 is their Symbian UI, and they’ve been using it for quite some time in all of the more powerful devices, be it business or multimedia-oriented. It’s very powerful and stable, runs pretty quick and there are myriads of third party programs available for it, and right now I’m typing this text on a S60 powerhouse. 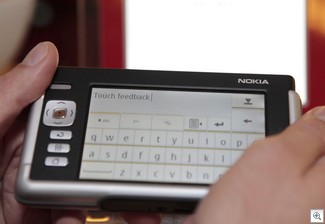 Now, in the post-iPhone time, they’ve been pretty much forced to unveil a new touch interface. It seems to be excellent (more on that here). But now they’ve added an icing on the cake: a brand new haptic feedback system, called “Haptikos”(“to touch” in Greek). This is very different from current systems, in that it gives local feedback and even the button press sensation. Red at Redferret’s been lucky enough to have a hands-on session with a demo unit and the impression was all but excellent. I, however still have complaints: for me, the main attraction of a physical keyboard is the ability to touch-type. It’s always pretty awkward to have to look at the phone whenever you need to dial, or write a text message or IM or anything. When will someone develop a technology that can also shape the screen’s surface to feel like a keyboard?

That’s when I’ll consider a touchscreen-only device. Until then, long live my rubbery QWERTY!

Here are some more links for the ones of you interested in the tiniest details:

Side note:
I wonder why new battery technology isn’t funded, created and released. This is today’s major problem with almost any device. I don’t want to have to carry power aids with me, be it additional power packs, or solar chargers or whatever. I just want a capacious battery!