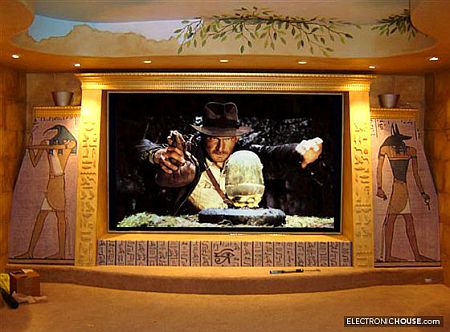 Well, perhaps in second place compared to the infamous “Death Star” home theater and slightly cooler than the DIY Trek Theater. And certainly cooler than the Titanic Theater, which admittedly has a vintage movie palace look. But still, can anyone tell me what is cooler than watching the Raiders Trilogy in a Home Theater Room themed out as a museum to the life of Indiana Jones? Teamed with hieroglyphics, replicas of the infamous golden idol that Indy carries football style in the opening scene or the cup of a carpenter as it’s bookend, and even an Arthurian Sword as a door knob. And naturally, there’s also the trademark leather jacket, hat, whip to finish off the ambience. The ceiling even looks like a worn rock face that exposes a cave to the elements. Sadly though, there’s no Lost Ark – though not for wanting one. Apparently, there simply was no room for it in the 8-by-12-foot theater.

What they did have room for was an array of A/V equipment that – while not cutting edge for audiophiles, does make the local Bistro rather envious. There’s torch style lighting driven by a Lutron Grafik Eye theater lighting system and a Control4 Home Theater Controller, high back recliners, an NEC HT1000 projector for its silver screen style big screen. The idea came from the torches – which the owner saw in a lighting store and inspiration struck – how cool would it be to Raiders themed home theater in their new home?