We asked you to vote on what you thought the coolest gadget of CES 2008 was. Well the votes have been counted and I’m pleased to announce….. somebody cheated! 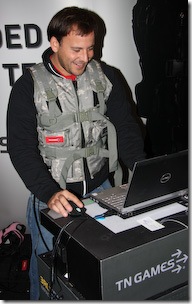 The FPS Gaming Vest had a commanding lead but out of nowhere the Computerized Chopper starting getting a load of votes. After checking logs, IP addresses and what not, we’ve got to discount at least 200 votes for the chopper, so the official Coolest Gadgets coolest gadget of CES 2008 is the FPS Gaming Vest, which just shows that we’re a bunch of masochists that like being punched when playing games.

Surprisingly we only had 10 comments on the post, one of which will win the $50 Amazon voucher and according to random.org the winner is…..

…Ian, so congratulations and I’ll be in touch about where to send the voucher to. Thanks again to everybody who voted and commented and whoever tried to rig the vote err why!

We do have more contests and give-aways planned this year and some other exciting news, so if you haven’t subscribed to our feed () yet there’s no time like the present.