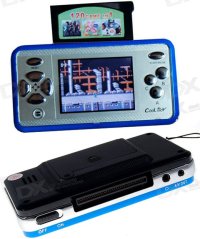 The Cool Boy’s manufacturers ought to have a pretty great team of lawyers at their beck and call, considering the fact that it is able to play emulated NES and SEGA console games, thanks to questionable – no, obviously bootlegged cartridges which hold up to 120 games that include copyrighted works from major game studios like EA, Nintendo and Disney. Some of the notable entertainment titles on offer include classics such as Donkey Kong, Galaga, Tetris, Xevious and Lode Runner among others. The Cool Boy comes with a 2.4″ LCD color display at 480 × 240 resolution and features an AV port which allows you to output to a TV. The system itself will sell for approximately $36, but I think you’d best save yourself the trouble and pony up another $90 to pick up the Nintendo DS Lite.