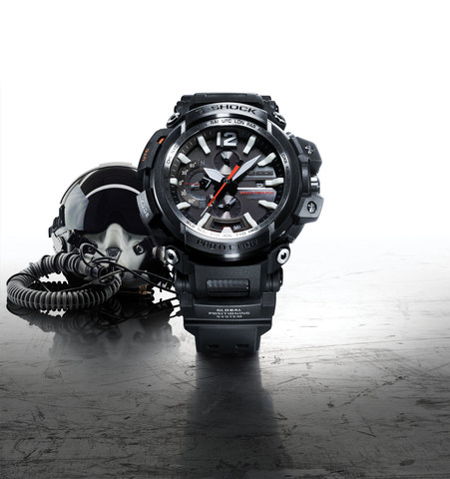 Casio’s obsession with rolling out quality timepieces has not stopped over the years, but rather, it has strengthened. The company has revealed its Gravitymaster G-Shock series in the past, but none of them have been up to the quality of this year’s model at Baselworld 2017 — where it is touted to be the first ever connected Gravitymaster G-Shock that has been released. This all new Master of G model will boast of Bluetooth connectivity that will hook up to your smartphone via an app, making it all the more versatile than ever before.

The Casio G-Shock Gravitymaster GPW2000-1A is the first-ever Bluetooth connected model under part of the Master of G series, where it has been specially built for aviation experts. What makes it so special? Well, it comes with connected GPS capabilities that include Mission Stamp, which is a function that will not only record time and location, it can also transmit the information via Bluetooth over to a special Smartphone Link app. This can then be viewed within a flight log.

The GPW2000-1A also carries the distinction of being the very first Gravitymaster model that comes with a longitude indicator, apart from a latitude indicator. This will add a key function to record travel location and history for pilots when they carry out their missions. Additional premium features that Casio has thrown into the mix include a sapphire crystal for minimal scratching, carbon fiber second hand, carbon fiber insert band and a unique carbon band lock insert, where all of these prevents loosening due to heavy vibrations.

Not only that, the GPW2000-1A will arrive with triple time adjust that is made possible thanks to Bluetooth connectivity and G-SHOCK’s GPS Hybrid Wave Ceptor technology. This results in even more accurate timekeeping regardless of where you are, thanks to the receiving GPS satellite signals or terrestrial radio signals from up to half a dozen transmitters worldwide, based on the current location and environment. Don’t expect the new GPW2000-1A to be cheap though, as it has an asking price of $800 when it becomes available from May 2017 onward.