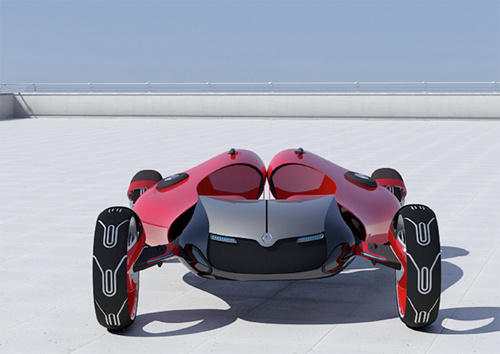 Anyway, the show had a bunch of talking cars, and I believe that it had one car that could split in two, and thus become two motorcycles. Keep in mind, I’m going on what a former roommate of mine had to say about this show.

The reason why I would even dare bring up Team Knight Rider is because it is the closest thing to this concept device that you see above. Read more about it after the jump.

It is a car that can split into two motorcycles. Consider this a “buy one get one free deal”. I suppose you get the frame with the deal, and you’ll have to put it somewhere when you and your friend are riding on the cycles. I suppose you can head for home, link the cycles together, and then go on a drive.

Well, this is still a concept project sponsored by Renault Design, and the designer got his idea form his diploma project at the National Institute of Design.