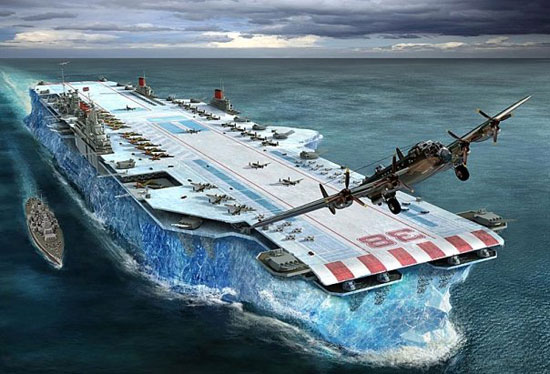 During World War II, there were a lot of technologies proposed that seem outlandish by today’s standards.
One of them was by a British inventor named Geoffrey Pike, who wanted to build an aircraft carrier that was mostly composed of ice. He wanted to build it using Pykrete, a material that is 86 percent ice and 14 percent sawdust.
You might be thinking that the only place to build a carrier made of ice would be in Arctic regions. There might not be a reason to defend this cold area, but this ice carrier is actually made for warmer waters, too. Yes, it would begin to melt, but it can be repaired while at sea using the waters around it. Don’t ask me how it is supposed to do that.
If Pyke’s HMS Habbakuk was ever constructed, it would have been one of the largest crafts at sea. It would be 2,000 feet long, 300 feet wide, and 200 feet tall. It could hold 200 fighter planes or 100 bombers, with a crew of about 3,700. It would have been pretty impressive, but only a 60-foot prototype was made. I’m guessing that it didn’t go off very well.
Anyone want to try and actually make another Pykrete vessel? According to my Source, only the Mythbusters guys have tried it.
Source