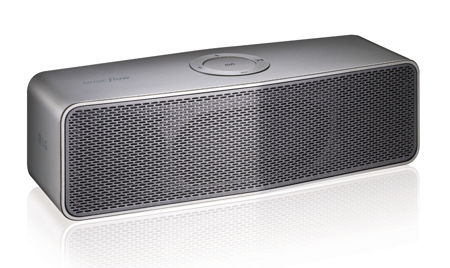 It is always good to be prepared, no matter where you are, and what you are doing. Having said that, if following the football season religiously is part of your family’s way of life, perhaps you might want to enhance the entire bonding experience this coming season by checking out just what kind of auditory pleasures that LG has on offer for you. The new range will include rechargeable battery-powered, Bluetooth-enabled speakers that can deliver premium sound anywhere inside or outside the home, and a powerful home theater system for the most premium sound possible, and most of them should hit the US from this October onward. On to the nitty gritty then!

First of all, there is the $149 Music Flow P7 which happens to be a 20-watt speaker with up to 10 hours of battery life, and that should be more than adequate for a whole day out. You are not going to play music throughout the day while camping, right, as you would also want to listen to some of the sounds of nature, and the Music Flow P7 can also be controlled using LG’s Music Flow mobile app. It will also be accompanied by a sister speaker, the LG Music Flow P5, which will tip the scales at an even lighter weight with this 10-watt model delivering powerful sound with up to eight hours of battery life.

More active listeners will appreciate the LG SoundPop 360, which has been specially designed to mirror the shape of a drinking tumbler, and it comes in a cylindrical speaker form factor that has a 360 degree range so music sounds great – regardless of the listener’s relative position. This is the ideal tool to have when it comes to tuning in to large groups, allowing whatever party that is being thrown to go well into the night with up to 20 hours of battery life.

Last but not least, the LG Cube Speaker System exemplifies LG’s expanded offerings for the sports enthusiast, where it delivers a powerful combined 1000-watt speaker and subwoofer, sporting a pair of USB ports and a portable audio input, in addition to Multipoint Bluetooth with NFC pairing. Heck, there are also multi-color LED lighting that pulse to the beat of the music. All in all, it looks like there is a little bit of something for everyone.