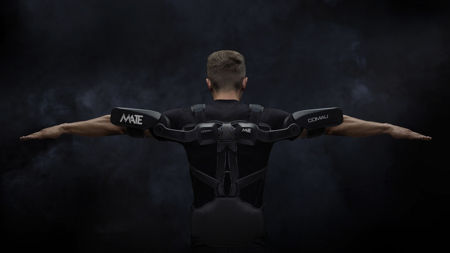 Can you remember the day when you watched Aliens? The exoskeleton in the movie that kicked the alien’s ass was rather crude in design, but it got the job done. Fast forward to today, and we have all kinds of technology that has enabled humans to work better and more efficiently, and Comau intends to jump aboard that bandwagon. Being a global leader in advanced industrial automation solutions, Comau has launched what it calls the MATE: its first innovative wearable exoskeleton. MATE has been specially designed to improve work quality without reducing any degree of efficiency, but rather, increase it, and doing so in a highly ergonomic manner by offering consistent and advanced movement assistance be it during repetitive or daily tasks.

The MATE Fit for Workers exoskeleton will rely on an advanced spring-based passive structure in order to get the job done. It arrives as a lightweight, breathable and highly effective postural support, getting the job done without the need for batteries, motors or other kinds of failure-prone devices. This is certainly a leap forward, as most other exoskeletons do require some kinds of mechanical movement that will certainly reduce its shelf life since anything with moving parts will require a greater degree of maintenance.

Not only that, the MATE is also compact and ergonomically designed, being able to fully able to replicate any movement of the shoulder while adhering to the body like a “second skin”. Some of its benefits include a reduction of shoulder muscle activity for some muscles by as much as up to 50%, enabling users to perform similar tasks with less fatigue in the process. The degree of consistent, ergonomically-assisted movement support will also in turn increase the quality and precision of repetitive tasks.

There is no word on pricing as at press time where the MATE is concerned.