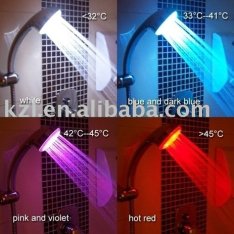 Every once in a while, someone comes up with some gadget for the bathroom that is actually useful.

Say, for example, the Illuminated Shower Head from KZLIDEA. As you can see, your water is normal if above 32 degrees Centigrade. It will go blue if in the 33-41 degree range, purple for 42-45 C, then the appropriate red for 45 C.

I think it is handy to have something that tells me the temperature, because I get tired of playing with those darn knobs. Of course, I don’t even know the exact temperature of how I like my bath or shower water. Usually, I just make it “just right”, whatever the heck that is.

I can only assume that it does this with the use of special lighting. Unless it has some food coloring packets mixed within that I don’t know about. That would be a little awkward. Hey, maybe there’s some Hawaiian Punch concentrate. That would be equally as awkward as you would have to ask little Johnny to stop drinking from the showerhead.

Right now, I have no idea where to get these, nor the price. In fact, I have good reason to believe that it is only available in China.