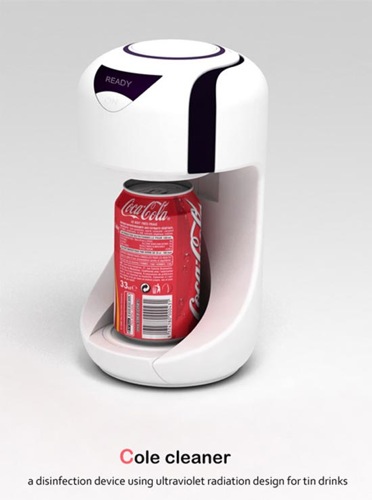 For most people it would seem ridiculous to sanitize a can with an ultraviolet gadget.  After all, cans usually appear clean, so most people don’t feel the need to worry any further about it.  However, the fact of the matter is, manufacturers are more worred about the creation of the cans than the actual sanatizing process.  Before that can gets to you, it has changed hands, been packed in crates and being in a factory where they create a syrup, pretty much guaruntees they’ve been around rats.

Granted, even with that in mind, I’ve ignored that and still preferred to drink directly from the can.  However, someone with more common sense than myself, might find such thoughts a bit discouraging.  Personally, although I’ve been well educated on germs and bacteria, I still tend to ignore all the extra protocols that are supposed to be taken.  This UV concept design was created by Leon Peng.  It sanitizes one can at a time.  If you don’t want to wait around for this to be created, there are plenty of UV wands out there that would work just fine for the job.  Actually better since you could use the wand for more objects than just cans.  Yes, perhaps cans do need to be sanitized, but having a product that only sanitizes cans just seems to be a waste of good money.