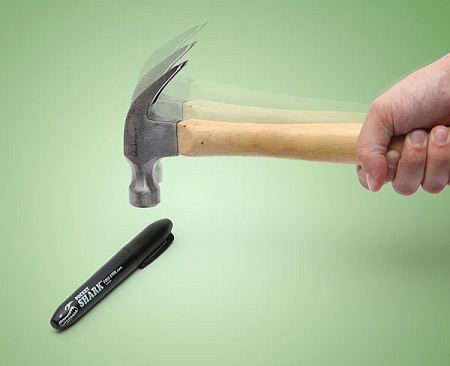 It seems silly to spend much money on a writing utensil, because we don’t place much emphasis on handwritten notes anymore. However, that doesn’t mean we don’t need to jot something down to remember what we need from the store. During these times, it is absolutely infuriating if you can’t find a working pen. Should you have a pencil handy, you’re all set to go as long as you have a pencil sharpener if the lead breaks.

Wouldn’t it be nice if you only had to buy one of something, and it wouldn’t break? If you’re a fan of fine, felt tip markers, then you’re going to love the Cold Steel Shark Tactical Marker. This is one writing implement that means serious business. It’s 6.5” long, and is 0.875” in diameter. While the clip might break off, the rest of it is basically indestructible.

Why might you want a marker that can’t be run over by a car and ruined or smashed by a hammer you ask? Well, I can’t honestly answer that. Paying around $8 for one writing tool seems a bit much, but as a lover of this kind of marker, I’ve spent that on Sharpie versions that I wish would’ve lasted longer. The cap screws on so you will have a much harder time of losing the top as it can’t simply be knocked off. There’s no mention of them being waterproof, so try not to leave them in your pants pocket.