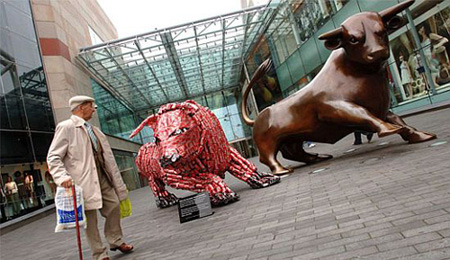 Coke might not be making great strides in the health department. Their beverages are still laden with sugar and other various carcinogens, but it’s pretty admirable what they are setting out to do for the environment. They’re on a mission to promote eco-awareness.

Coca-Cola has commissioned artist Sam McGeever to create pieces of pop culture art using recycled Coke cans. McGeever has recreated such famous sculptural pieces as London’s Big Ben, the iconic Angel Of The North (made using over 10,000 cans), the Clifton Suspension Bridge, and even the Birmingham Bull.

Some might say that Coca-Cola is more interested in the PR aspects than actually alerting people to environmental change. And this might be a valid point. But you have to admit, recreating some of the most notable landmarks in the UK with used Coke cans is cool no matter what the cause.

You can catch site of these sculptures on the actual grounds of the original pieces of art. No word if they’re still standing in there original spots, but maybe you can take a look. It’s worth a try.