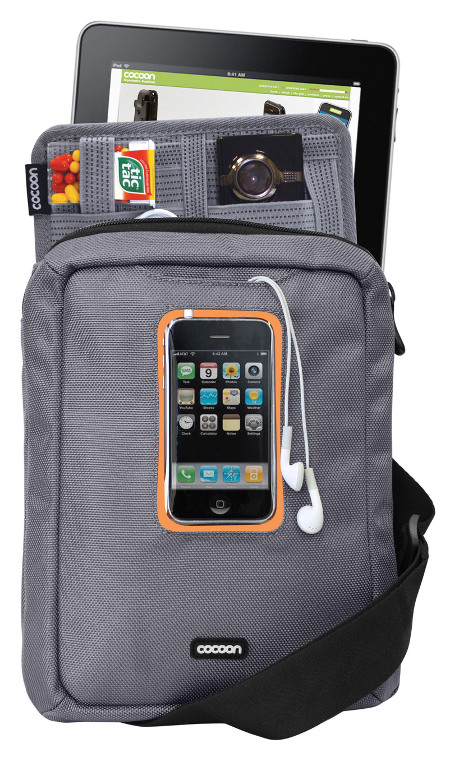 We know that the Apple iPad was announced just a couple of days ago, but third party accessory manufacturers have already started churning out iPad compatible items in the form of protective cases and sleeves, with Belkin being just one of them to be out of the stable doors first. Today, we shall take a closer look at what Cocoon Innovations can offer in the form of The Gramercy. The Gramercy is a sleek, messenger sling which is capable of offering the perfect solution for organizing and securing your very own Apple iPad when you get hold of the Wi-Fi only version a couple of months from now. Thid messenger sling will come with its own windowed media pocket that allows you to stash away other gizmos (preferably Apple branded ones to show the whole world what a fan of Cupertino you are), including smartphones and MP3 players. What’s more, it will come with the acclaimed GRID-IT system which ought to come in handy for the storage and organization of all your daily essentials. What is GRID-IT, you ask? That’s a patent-pending organization system that comprises of a special weave of rubberized elastic bands which double up as an object retention system, helping to ensure all your devices, personal items and accessories will remain in place during travel.

Why The Gramercy? Well, it was named after one of New York City’s trendiest neighborhoods, and aims to live up to its name by offering unmatched style as well as function in this new era of the digital age. The vertically designed Gramercy is also lightweight and compact, letting you sling it around your shoulder without suffering from any strain after a while thanks to its comfortable and adjustable shoulder strap. You will also be able to access its windowed front pocket in a snap, providing touch screen usage and operation despite having the device stashed away behind it safe and sound. As for its pocket, it will be compatible with the iPhone, iPod touch and other devices.

You can choose from three bright and stylish colors – Black with Burst Yellow interior, Gun Gray with Orange interior and Racing Red with Java Brown interior. The Gramercy will be available from April onwards for $29.99 a pop.