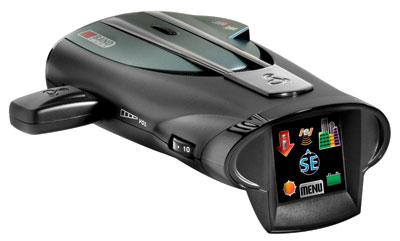 When I first saw that Cobra had invented a fuzzbuster with a touchscreen, I couldn’t help but think that this was some device to get rid of lint or other forms of fuzz, and wondered why a device like that would need a touchscreen.

However, the Cobra XRS 9970G is a fuzzbuster that is designed to avoid the fuzz that we all hate: the type that give speeding tickets. Of course, these are illegal in some states, but they are handy for staying off the cop-radar in the states that do not outlaw them.

One of the biggest problems with these fuzzbusters is that they are very hard to program and use. It’s one of those devices that has a manual, and you probably need to use it. The 9970G’s touchscreen makes it very user-friendly, and allows for simple setup and use.

The 9970G also has a GPS chip with “15 laser/radar bands alerting duties”. It also has an AURA database that will keep the user alert of traffic cameras, dangerous intersections, and my least personal favorite, speed traps.

The Cobra XRS 9970G weighs about 6.5 oz and is only 5 x 3 x 2 inches. That’s small enough to be out of the way, but still ready when needed. It will cost about $389. You might want to add up all your speeding tickets over the past few years and determine whether or not this is a wise purchase. That, or you could just slow down…