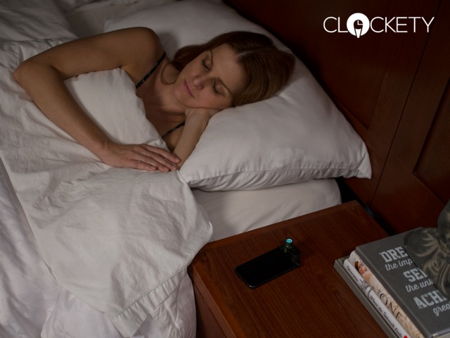 The whole idea of pico projectors never really took off, simply because there really wasn’t any real market niche for it to fill up. Apart from that, battery life proved to be an issue, and so were brightness levels which were not up to par for a boardroom sized presentation. Having said that, there are still pico projectors in the marketplace, with new models being released from time to time, although those happen to be rather rare and few in between. Heck, even a company like Samsung has come up with a smartphone that has a built-in projector before, and so did India’s Spice with their Popcorn Projector M-9000 Phone. Having said that, how about a projection clock instead? This is where the Kickstarter project known as Clockety comes in, where it touts being the first smartphone projection clock in the whole world.

This patent pending timepiece is portable, smart, easy to use and comes with a complimentary iPhone app that you are able to wield so that it can control Clockety in the same way that you want. It beats out all of the other projection clocks that are in the market, as those happen to be relatively bulky and are not too portable, not to mention requiring a constant power source, while others do not have the smarts apart from the bare basics of a built-in alarm. Clockety ensures that it has none of the mentioned.

All that you need to do is to make sure it has enough battery power left (which is said to last for up to a year before a battery change is required, now how about that for convenience?) , where the Clockety is then paired up using Bluetooth or Wi-Fi. Once done, fire up the Clockety app, set your alarm and it is time to hit the pillow and catch up on your beauty sleep.