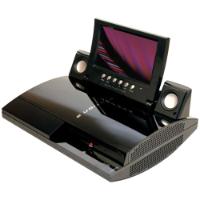 Some of you might remember the 7 inch LCD Wii Screen that I reported on yesterday, so I felt it only just to report on an LCD screen for the PS3. I have to tell you, these two products are so alike, that someone probably got sued.

Both of these screens are similar in the way they can conveniently attach to your console and play your favorite games. The screens are exactly the same size at seven inches, but it appears this PS3 screen is concave in contrast to the flatscreen for the Wii.

The Wii Screen can plug into a cigarette lighter or wall outlet, but the PS3 screen is plug-in only. I suppose that makes the PS3 screen not as portable as it should be, but hey, portable technology for video game consoles is relatively new. I suppose you could get yourself a PSP if you really want portable Playstation gaming.

Despite its lack of portable power, you have to admire the tiny speakers on the PS3 screen, something that the Wii Screen doesn’t appear to have.

You can purchase the PS3 Clearvision 7 inch LCD Screen at Shenzhen Madcow, but I found the site is slightly dysfunctional. Right now, I can’t even get a price for it. Maybe I should look into a portable screen for the Xbox 360 next.