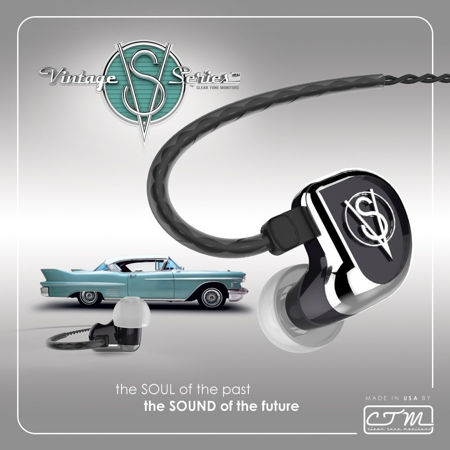 Clear Tune Monitors is pleased as punch to announce its long awaited universal fit line of in-ear monitors that is known as the Vintage Series. Since Clear Tune Monitors is a musician driven company, it has a great love for vintage in the implication of its name, hence it is but a matter of time before that particular passion and their collection of talent met, resulting in one of the most exciting ideas that they have worked on to date. Sporting vintage looks to go alongside modern sound, their Vintage range of universal fit in-ear monitors should be able to blow your mind away — or should I say, ears.

Sporting dual, triple and quad driver models, these new universal fit in-ears from Clear Tune Monitors ensure that you can have the soul of the past along with the sound of the future. Such new universal fit in-ears from Clear Tune Monitors will feature aptly-named models like the VS-2, VS-3 and VS-4, to correspond with the number of drivers within. Do expect the Vintage Series range to please the likes of casual music listeners, working musicians and audiophiles, as it offers a soul touching experience which not only looks cool but feels cool and sounds even cooler.

To mark its growing momentum of international growth, the Portable Audio Festival (POTAFESU) 2016 in Tokyo, Japan, has been picked out as the location for the roll out of this new Vintage Series range. Following that, there will be a product launch event in South Korea, which is part of the context of consolidating Clear Tune Monitors’ ever growing presence in Asia. This is definitely encouraging, especially when you take into consideration how Clear Tune Monitors is an Orlando based company all the way in the US..

Expect the new pair of Vintage Series by Clear Tune Monitors to ship later this coming August 2016, although pricing details have yet to be determined.