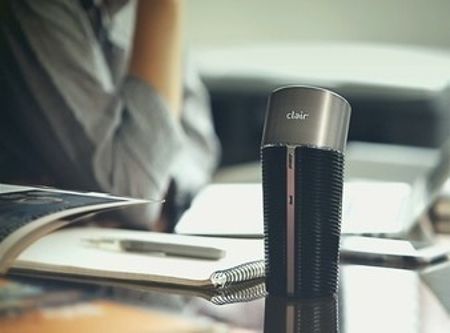 Living in a modern metropolis with all the bells and whistles of development can be fun, but in many cases, there are other drawbacks that one has to take into consideration, including battling the smog, not to mention being stressed out by traffic jams and all the ills of a city life. Of course, exceptions to the rule where the air is nice and clean to breath would be a metropolis like Tokyo, but more often than not, smog and haze are all part and parcel of city life. It would then make plenty of sense to ensure that your home will have clean air for everyone to breath, never mind the fact that you are more or less powerless about the outside air quality. The ClairB portable air purifier is something that you might want to check out then.

For starters, the ClairB will make use of Clair’s patented Magnetic Air Filtration (MAF) technology which comprises of two stages: a plasma ionizer and an electret film filter. Thanks to this dual-stage system, ClairB exceeds HEPA standards through achieving 99.97% filtration efficiency and doing away with contaminant particles that are as small as 0.1 micrometer (μm). MAF Technology have also been found to not only remove micro dust particles but also viruses, bacteria, allergens, pollen, volatile organic compounds (VOC) and even harmful chemicals.

The air filtration system of the ClairB will comprise of two stages which work in conjunction: a charging stage and a trapping stage. First of all, the plasma ionizer polarizes incoming particles, and as chemical molecules and other biological agents enter the charging section they collide with ions, whch will then gain that ion’s static charge. In such a polarized state, contaminants will end up attracted naturally to ClairB’s electret filter. The ClairB is small enough to be the size of a coffee tumbler, which then makes it extremely portable, and hence is a snap to tote around. It runs at just 5 volts, allowing you to hook it up to a computer, a smartphone charger, the cigarette jack in a car, or portable power bank.