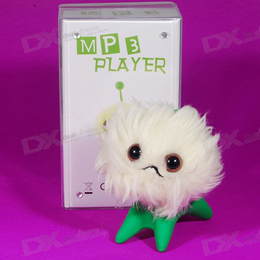 Apparently this odd little MP3 player is modeled after a dog that appeared in Stephen Chow’s CJ7, which I had no idea was even in existence.  Maybe in my part of the world they didn’t deem it worthy of actually being presented in theaters.  However, someone decided it was worth a gadget being made after it.  I have to admit the movie trailer seemed decent and even a bit humorous.  Don’t worry, it was actually meant to be funny.  It wasn’t funny in the way that it would make its way onto MST3K, which I’m an addict for.

It’s also an alien dog, not a deranged poodle which was my original guess.  It does still look a bit  like a poodle that decided to mate with a Furby.  Which is a combination I never wanted to imagine, much less actually see.  The strange little dog comes with built-in speakers as well as 1GB of internal memory.  It also has a USB port to charge it up as well as transfer data.  It is being sold for $18.67 over at DealExtreme.  At least it’s not an overpriced ugly dog.