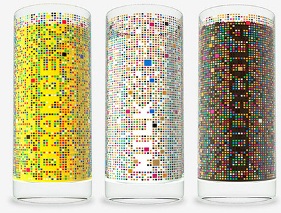 Have you ever been in a party where every glass was the same, and you didn’t know which was yours? What’s really sick is when you take a sip, and discover that it is definitely not your drink.

Now imagine that you had these Cipher Drinking Glasses designed by Damjan Stankovic. See all those random colored squares on the glasses? Apparently, they have some odd ability to make certain words depending on what the liquid is in the glass. Depending on what squares appear, that will show what is in them.

It’s like those glasses back in the eighties that had the muscular men or buxom babes with the outfits that would disappear if there was liquid in the glass. I suppose that this is some sort of sensors in order to spell out what is in the cup.

You will note that it knows that one is “Coca-Cola” as opposed to “Pepsi”. Those would have to be some interesting sensors, and I wonder if they could detect a virgin drink from an alcoholic beverage. I mean, there must be thousands of possible drinking combinations, and I’m just not certain that this one glass could really do them all.

Unfortunately, this is still a concept device, so I doubt you’ll be seeing these glasses at a party anytime soon.