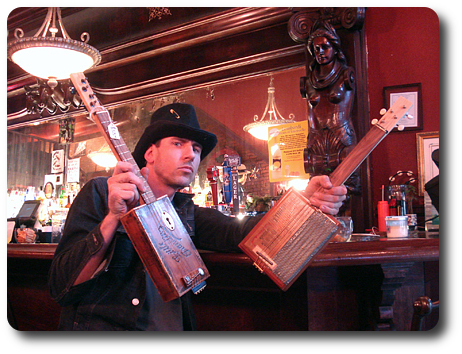 Have you been a victim of the Steampunk craze yet? Maybe most of the designs seems a little to unworldly to you. How about something with a bit more of a terrestrial edge that still holds onto the Steampunk values of design? Mark Melchior has designed a musical instrument gadget that might be right up your alley.

These Cigar Box Guitars are not as extreme as some of the other Steampunk designs, but are clearly hinged on the influence from Victorian era and antique ascetic. Mark “Doc-o-rock” Melchior has 20 years of guitar building experience under his belt and started building these Cigar Box Guitars, taking a shift from his usual traditionally built instruments.

The Cigar Box Guitars are clearly designed with the old world artisan culture strongly intact. Each playable guitar is made with an actual antique cigar box. Each guitar is one of a kind. Melchior sorts through antique shops looking for all-wood pre-1930’s cigar boxes for creating his instruments.

Plans are in the works for creating electric versions of these awesome Cigar Box guitars, as well as customized amps to go along with them. The electrical pickups will be hand wound, and the included amps will be hand-built and tubed.