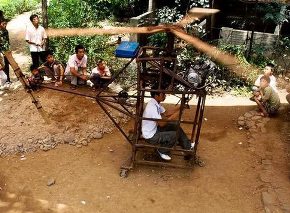 I realize that normally we devote our articles to products you can actually buy, but the story behind this man’s helicopter is flat-out amazing and inspirational to us all.

Wu Zhongyuan is a 20 year old farmer who, ever since he was a child, dreamed of not needing to climb mountains anymore. It would appear that he found his remedy by creating his own flying machine. Wu used principles that he learned in middle-school physics and other relevant knowledge by surfing the Internet on a mobile phone to create this helicopter.

The blades are made from Elm tree wood, and a motorcycle engine provides the power. The frame is reinforced with steel pipes, and he claims that his single-seat copter can fly up to 2,600 feet! Believe it or not, he assembled this DIY helicopter for just $1,600.

This is one of those stories that I really hope is not made up. After all, who hasn’t had a dream and desired that it take flight? Mr. Zhongyuan doesn’t sound like he had a major corporate sponsor, just vision and ingenuity.

Sadly, the Chinese government won’t let Wu fly. I’m pretty certain that the FAA probably wouldn’t let an American inventor fly their own helicopter either, but the fact that someone could do so much with so little just inspires me, really. Kind of makes you wonder what you are doing with your life, doesn’t it?