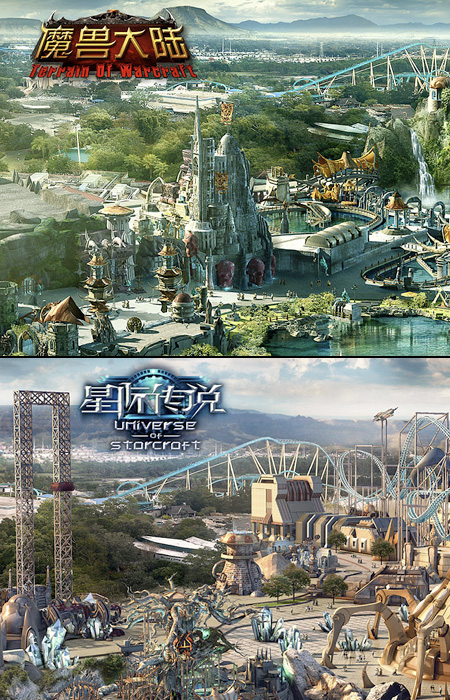 What you are seeing here are plans for a park known as Joyland World, and these are some of the sub-parks. You know how Disneyland has Tomorrowland and Adventureland? Well, Joyland World has Universe of Starcraft and Terrain of Warcraft.
In case you are wondering, Blizzard Entertainment, actual makers of the games that these sub-parks are obviously emulating, are not officially endorsing these attractions. I can’t imagine why. Then again, I’m not certain how big Blizzard is in China. Also, how many American players are going to fly to China to see these amusement parks?
If you want my opinion, the gaming company probably fears that these parks will face budget cutbacks and will absolutely suck, and doesn’t want any official name attachment whatsoever. I’m sure there are a lot of Disney attractions that aren’t endorsed by the creators that inspired them. I always wondered how Walt Disney would feel about Star Tours.
Still, I will have to admit that the sketches look quite cool. I would personally like to visit them, and I don’t play either of those games, nor do I intend to visit China anytime soon.
If these parks work in China, I think they need to build some serious hotel/casinos with these sub-park themes in Las Vegas. It would be a good day for them if they opened on the same week as CES.
Source