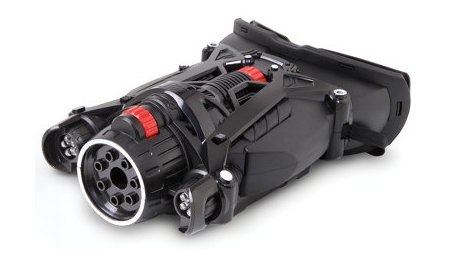 So your kid has dragged you to the cinema to catch the latest Spy Kids instalment which frankly, is one of those movies that should never have been made. I’m serious – the movie itself is a travesty so to speak, and tack on the gimmick of 3D on a non-descript movie and you’ve got a major disaster on your hands. Well, assuming they have yet to discover the difference between a bad movie and a good one, surely they won’t mind getting some spy gear of their own – such as this Children’s Night Vision Monocular.
Retailing for $69.95, this is not exactly an impulse purchase, but it is still affordable enough to buy without causing irreversible damage to your bank balance at the end of the month. To put it plainly, this night vision monocular allows children to observe subjects in near-complete darkness, since it relies on a similar type of infrared LEDs that see action in home security cameras.
A couple of 5-LED clusters are arranged on either side of the objective lens so that it can illuminate subjects up to 50′ away without any detection, and with this, you can be sure that your kids won’t be sleeping even an hour after you’ve read them their bedtime stories. No sir, they will most probably be taking turns with the Children’s Night Vision Monocular, peering out of the window and down the street hoping for a Super 8 moment.