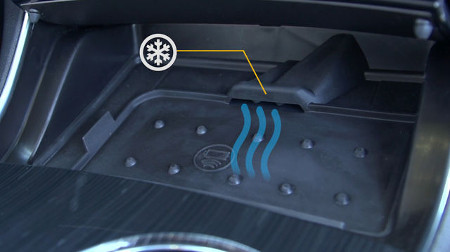 Have you ever entered a car that has been baking underneath the sun for a few hours, and you need to get to a different and unknown place via GPS, pronto? Naturally, we would whip out our phones and perhaps launch a navigation program from there, such as Waze. Well, the handset would definitely heat up rather fast – even when the temperature around is cool, and Chevrolet hopes that your handset will not overheat in this case like reports from Japanese owners of the Sony Xperia Z4, by introducing what they call an Active Phone Cooling system.

Models from Chevrolet that will feature this Active Phone Cooling system will be the 2016 Chevrolet Impala and Malibu range, where you will also be able to enjoy wireless charging for your smartphone, now how about that for convenience and added value for money? Chevrolet realized that the smartphone being juiced up would get hot – very hot, in due time, and requiring the handset to shut down due to safety, and this is where Active Phone Cooling comes in.

It works by pushing cold air from the vent into the very same bin where the smartphone resides for the wireless charging to get done. Needless to say, only when the vehicle’s HVAC system is active and running, will this feature work – it is but logical. A cheap hack that will not have the wireless charging segment can be achieved, and this can be done by tweaking existing phone holders where you place your handset right in front of an air conditioner vent in your set of wheels.

The thing is, would you purchase a particular car model just because it is capable of keeping your smartphone nice and cool, or would you want to ensure that the Chevrolet models on offer that come with such a feature would be able one that is easy to maintain, has low fuel consumption and generally speaking, is an all round, reliable vehicle? At the end of the day, it is but a nice bonus to have.