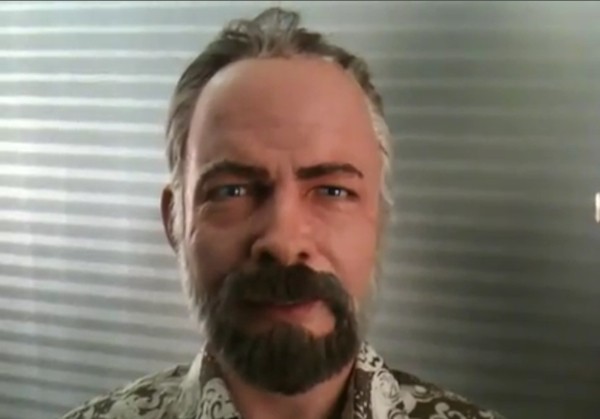 If you have never heard of Philip K. Dick, then you might have heard of his body of work.
His stories have inspired many movies including the classic Blade Runner, not to mention other decent science fiction films like Total Recall, Minority Report, and A Scanner Darkly. Then there are other mediocre adaptions like the Nicholas Cage movie Next, Impostor, and Paycheck. I’m not certain of the status of The Adjustment Bureau. That last film is coming soon, has Matt Damon, and looks pretty interesting.
I guess a lot of people like the body of works he left behind (he passed away in 1982), which is why this robotic head of the late author was made, apparently. You can watch the head in the video speak, and it says what sounds like his non-fiction and fiction works.
It was built by robo-PKD to replace another robotic head of Philip K. Dick that broke down in 2006. So there are two robotic heads of this guy? Who else has a robotic head?
You know what the greatest tragedy is about Philip K. Dick? He died before the movie Blade Runner was released. The film is unparalleled science fiction classic, and he never got to see it become the phenomenon that it became. I guess that’s why the robot head was made, so he could see how his works have lived on.