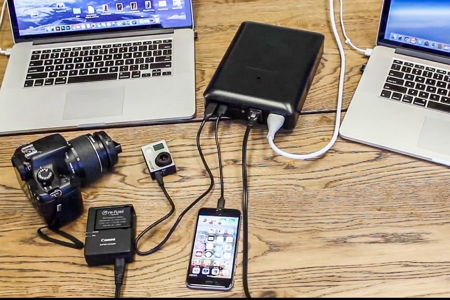 The modern day road warrior will find that his or her smartphone tends to run out of battery pretty quickly — especially when you have to attend to many tasks on the device, all the while having it communicate with other devices via Bluetooth or even doubling up as a hotspot for some. Power banks are an obvious choice for power users for sure, and so are protective cases for smartphones that come with a built-in battery. However, there might be something that is more useful for multiple devices, and ChargeTech’s PLUG happens to fill that niche by being the most powerful battery pack in the world.

The PLUG intends to be a trend-setter in portable power solutions, having just launched the PLUG as an Indiegogo campaign which has proven to be a success. First of all, the PLUG will boast of an impressive 48,000mAh battery capacity along 250 watts of power. Such figures make the PLUG as one of the highest rated battery packs of its kind in the market.

In other words, users are able to opt to charge laptops up to 3 times, tablets up to 7 times, smartphones up to 28 times, TVs up to 4 hours, drones up to 3 times, DSLR cameras up to 30 times, mini fridges up to 8 hours, hoverboards up to 2 times, among others. As for the kind of devices which are compatible with the PLUG, it should cover a wide range of notebooks, iPhones and other mobile devices, iPads, CPAP machines, medical devices, desktop computers, printers, flat screen TVs, PS4, Xbox ONE, Wii U, video gaming consoles, mini fridges, cameras, drones, and hoverboards.

In terms of connectivity, PLUG arrives with universal dual AC outlets with dual USB ports, letting you juice up to four 4 devices simultaneously. It also comes with international worldwide compatible outlets with power outputs of 120V to 240V, while featuring pass-through capabilities that enable both the PLUG and other devices to charge simultaneously. Not only that, it has an optional 40 watt solar panel that can recharge the PLUG within 8 hours. In addition, a USB Type-C charging port delivers the fastest charging speeds, allowing it to play nice with multiple devices for on the go charging. There are also beautiful LED display and power indicators so that users can check up on its charging status. The PLUG will have a recommended retail price of $329.