Hope you’re having a fantastic Friday, it’s time to vote for what you think is this week’s coolest gadget (leave a comment for a chance to win a $50 Amazon voucher).

The USB Riff Rocker is essentially a USB controller for a game. You plug the little rocker into a free USB socket, download the two games off the Riff Rocker website, and then thrash your little fingers off.

The full post can be found on Gadgets For Men.

How annoying is changing phones and having to get all your contacts onto your new handset? Moving all your contacts onto your phone memory or SIM, taking phones apart, swapping SIMS (if your new handset’s not locked), yadda yadda. It’s got a lot quicker with the use of software and a computer but don’t you just wish it could be instant? Well now, thanks to this little gadget, it is.

The full post can be found on Decide What to Buy.

In what is without a doubt the coolest Lego project I have seen in a long while, builder Ricardo Oliveira has built a Lego movie theater, complete with a tiny 24 fps projector. The biggest surprise was that the thing actually worked, had I not seen the video I might have dismissed it as April Fool’s day foolishness; it is real. The level of detail in the theater is incredible, right down to row designations on the seats and cups for the patrons. 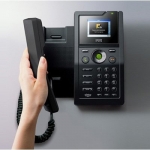 The IPEVO Skype phone blends VOIP technology with a familiar form factor. The design is geared for those that enjoy Skype but dislike using a headset. The IPEVO phone includes a 2.4 inch color display and supports both WiFi and a wired ethernet connections.

Teafal Quick Cup Delux: Go Green when having a Cuppa

The Tefal Quick Cup Delux has the capacity to get your tea steaming away in your mug in three seconds. Its ability to heat water so quickly means that it saves around 65 per cent of the energy used by a standard kettle. It has an adjustable tap, anti-splash spout and drip tray, which makes it easier to dispense water into either a short tea cup or a mega-mug.

This bag is new seamless mashup between Directot’s Chair and Modern Messenger Bag.

The full post can be found on Hardware Sphere.

The new Nespresso CitiZ espresso machine range takes its inspiration from the streets – literally – of major cities from around the globe. The colors of well-known focal points and objects, the design and shapes of buildings and landmarks, and the urban vibe and attitude of cities led Nespresso designers to create a new generation of Nespresso machines. The design is not only an improvement in looks but in the footprint of the machine as well. Compared to the Nespresso C100T Essenza – the Nespresso CitiZ takes up much less space in width, and has some new features that make it a standout.

The full post can be found on Single Serve Coffee.

The Thumb Saver does exactly what it says and will take a dangerous job and make it safe and simple. If you enjoy you’re DIY at home then this is a safety gadget which you must have. I really believe this is a handy gadget which will reduce many injuries in the home and workshop whilst using a hammer.

The full post can be found on Tech Styling.

Thanks again to all the sites for their submissions now over to you guys for voting (don’t forget to leave a comment with your reason for a chance to win a $50 Amazon voucher).

Want to hear about future contests first? Subscribe to our daily digest via email or RSS.

If you write for a gadget themed blog and wish to be included in next weeks contest check out the CGOTW instructions page.