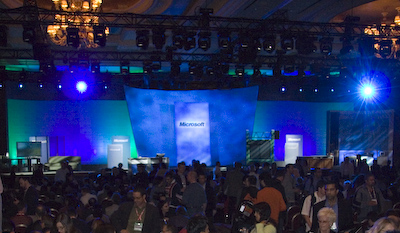 The room is packed, there are jugglers on stilts walking around to keep the crowd entertained while an entire ballroom fills with spectators and the soft rattle of hundreds of laptop keyboards sounds like rain falling outside. Lights dim, the introductary music fades and we begin the CES 2007 with the first keynote speech.

Connectivity was the theme from Microsoft at this year’s keynote. Devices – mobile phones, PCs, TVs – are coming along quite nicely on their own but it’s only when they come together that they become really powerful and that’s where MS want to be playing, specifically with Vista. Bill Gates and co did speak for an hour and a half though, so I’ll split the keynote into a few posts covering the different topics.

We started with a review of Microsoft’s progress to date – we were reminded that the Vista release candidate was seen by 5 million people worldwide so it’s undergone a huge amount of testing. We were then treated to a demo of Vista doing a few things I’d not seen before:

– A search facility that can (if set up properly) search all the Vista PCs on the home LAN for a file, rather than just the local box. The emphasis is on finding your information wherever it lives, not about getting hung up on searching for it. Privacy implications aside it’s a cute feature and one that should be well received in an age of ever increasing hard drive sizes.

– The Shadow copy service was used to restore a file to a previous version. This is basic version control of documents at an operating system level and is a pretty cool feature to have. I don’t know whether this needs specific software support though, it was demoed using Office 2007.

– Office 2007 was shown. The main thing here seems to be lots of live previews. Change a style or format a picture and the document reflects the change instantly (but temporarily until you apply) and without fuss. This is nice eye-candy but I bet it needs some serious horsepower to operate as well as we saw it running.

– Vista can use an XBox 360 controller natively to play games or (as we saw) to navigate 3D worlds in Windows Live 3D. Sad to say it but this is, for me, probably one of the most useful features of the new OS!

– Vista Media center was given a lot of screen time. I have to say there’s some really nice stuff here. Gorgeous high definition content seamlessly viewed, and a new service showing sports channels with real time information overlayed. Fantastic – as long as you live in the US. For us in the UK this is just irritating as it shows what *could* be done with industry support!

– A new application from Microsoft Research was shown that used, presumably, the power of the new Vista graphics engine to create a new photograph by taking selected parts of existing photos and seamlessly stitching together the best parts of each.

– Also on photography, the new Vista photo gallery application was shown. I’ve used this in the release candidate and as with most OS bundled apps it’s fine for basic functionality and finding your holiday snaps but serious photographers will want more features. Still, it does beat trying to navigate a folder structure you created 2 years ago to find that one photo you need!

– To wind up the Vista demo we were treated to a full motion video desktop running behind other applications. Cute enough as a tech demo but I guarantee you’ll use it once and turn it off forever when you want to actually get some work done.

Microsoft seem to see the future value in Vista in delivering ongoing updates – They make a point of the product not being a static piece of software but rather an evolving “ecosystem” (their words). Softening us up for a world of endless software rental perhaps?