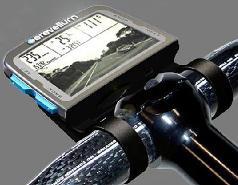 I usually don’t cover electronic gadgets for bikes, simply because there aren’t really many of them out there, frankly.

However, the Cervellum Bike Digital Rearview Mirror seems to be an interesting and useful device. As you might have guessed by the picture, a biker can now see all that is happening behind him or her.

I suppose that seems useful, as bikes have a terrible way of being made without rear-view mirrors. I’m kidding, of course, but as I recall from basic driver’s ed, you need to check your mirrors, then look, then make your move.

I guess we don’t feel that way about bikes, so I was never taught to look into the mirrors. It would reduce the risk of bumping into something while you’re looking or turning wrong, or something.

In other words, I’m not certain how good of a job the Cervellum Bike Digital Rearview Mirror will do. Especailly when it has a 4-hour battery life. Better do some short rides.

Right now, it is still not get ready for release, but it is expected to be about $200 when it is. You should also know that Cervellum is already developing plans for devices for GPS and hear rate monitors.