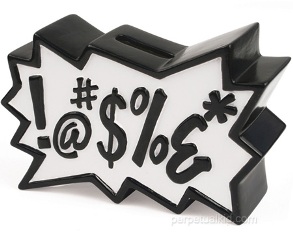 The Sandford police department from the film Hot Fuzz would definitely appreciate this particular device. Some of you might remember the “swear jar” that the clueless cops kept there, and the terrific scene where Nick Angel (Simon Pegg) fills it up when he vents his frustration against the other officers’ ignorance. I don’t think I ever had a swear jar growing up, but I can see where it would come in handy. I’m pretty certain that the entire budget of The Osbornes came from that family’s daily bleeping.

So why not make a swear jar that looks like something some comic book character would say when he or she is cussing? By comic book character, I mean those of old-school fifties and sixties superhero comics. I’m pretty certain comic characters can pretty much say anything they want, as long as their book didn’t fall under the Comic Code authority.

So if you have a sailor living in your home, and you want to make a little extra money on the side, this Ceramic Swear Bank is the way to go. Fortunately, it has a rubber stopper so you can access the excess funds whenever you wish. It’s not like those older piggy banks that you had to completely shatter if you wanted to access your savings.

You can get the Ceramic Swear Bank on the Perpetual Kid site for about $12.99. While you’re there, pick yourself up a Fridge Locker.