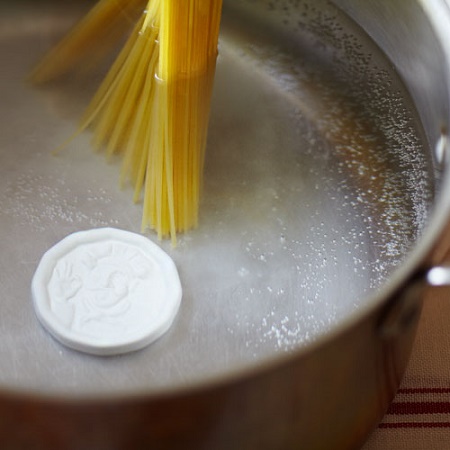 When making dinner, you’re usually not focused on one task. It’s far more common to be pulled in four different directions, and it can be difficult to keep track of everything. More often than not, you get to a point where one aspect of meal preparation diverts your attention for longer than you intended and you don’t realize what has happened until you hear water boiling over or smell things starting to burn.

While it would be nice to set a timer for each task you have ahead of you, you don’t always know how much time it’s going to take water to boil or exactly how long food needs to sit in the pan before being flipped. If you want to at least make sure the boiling water doesn’t start overflowing, then it might help to have a Pot Minder handy. This is a little ceramic disk that you place into the bottom of your pot, and whenever the water is about to get to a rolling boil, this will start to clatter. It’s the same idea as a kettle whistling at you whenever the water has reached a boiling point.

This is made of fully vitrified porcelain ceramic, and can be used over and over again. It is a simple idea that will hardly ever be dirty since you’ll be putting it in boiling water, and only costs $3.95. It can even be used in the oven. You could always experiment with other things in your home to act as a reminder in the same way, but you’ll want to make sure it can handle high heats like this little kitchen helper.