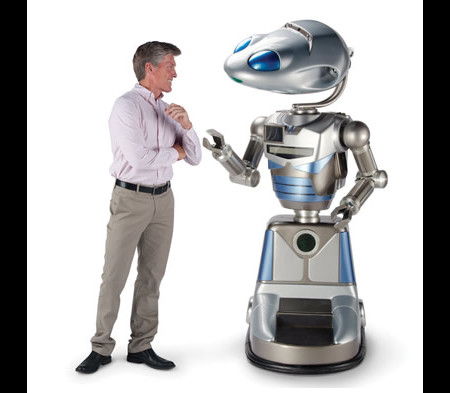 I do suppose if you happen to be extremely rich, and have more money than sense to burn, then you could start to look around and rack up some frivolous acquisitions – stuff that might have your descendants scratch their heads after you have long gone, wondering just what their great ancestor was thinking when you bought this and that? Perhaps the $345,000 Celebrity Robotic Avatar might no longer be functioning half a decade down the road, but right now, if you have decided to pick one up, you would be purchasing a piece of history. This is the only robot that has been admitted to the Screen Actors Guild, and it has also made various appearances over in movies, television programs, music videos, not to mention having entertained Royalty around the world while attending countless corporate functions.

Controlling the Celebrity Robotic Avatar is done through an intuitive wireless remote which is tiny enough to escape any kind of detection for the ordinary person, and it does make it look as though the robot has a mind of its own, sporting fluid, lifelike movements, and is able to bust out smooth dance moves to boot, while sporting an engaging personality that will be able to add celebrity star power regardless of the event. Do give it a go if you have that kind of money to spare, where his head, torso, and multi-jointed arms are able to be operated independently – or perhaps in limitless combinations that results in graceful, lifelike motions. Definitely far from being the cheap robots that we have seen in the past.