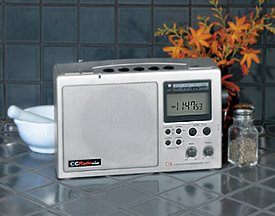 The improved version of the CC Radio is also known as CC Radio Plus, and let me tell you: I have seen plenty of radios in my life but this is on the top 5, or maybe I’m just over reacting and if that is the case, please say so!

This cool gadget is capable of making pancakes for breakfast delivering both FM and AM radio – it can even pick stations from 300 miles away, or so they say. With the CCRadio Plus you are also able to listen to local TV channels because it has a special TV audio receiver, similar to what you’d get with a TV antenna on your roof. Besides the radio features it comes with an alarm for whenever there are weather emergencies, by using it you will instantly know about any kind of emergency alerts so you can escape instead of being hit by a tornado while sleeping.

The good features don’t end there, for the people that like to start the sleeping scene while listening to one specific radio station that only plays music, but at the same time, like to wake up to the sound of a different station that has a special talking show, the CCRadio Plus offers the ability to create a preset hour and it will automatically switch to the desired station.

On the radio itself, there are input & output jacks and an external antenna to be used in case the radio signal isn’t clear enough. It comes with a AC adapter but, if you are a big time traveler and would like to take the radio with you, just use 4 D batteries and enjoy +250 hours of continuous play.