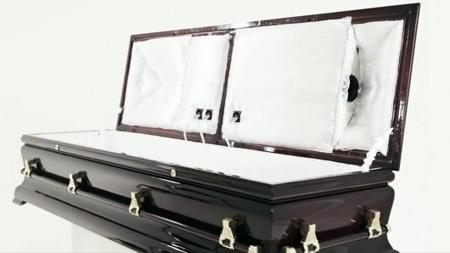 Do you believe in life after death? Well, whether you do or not, you might want to check out the CataCoffin, which is the brainchild of a Swedish company known as Pause. What does the CataCoffin offer? For starters, it will come with a CataCombo Sound System that will boast of a custom-built 2.1 amplifier and will be accompanied by a pair of 2-way speakers, tweeters with external cooling, as well as an 8-inch subwoofer that has been specially tuned to the coffin’s acoustic space. Now, I do not know of any living vampires, and just in case you get walled in your coffin alive due to a wrongful diagnosis at the hospital, at least you have your favorite tracks to keep you company until the end comes.
The CataCoffin will be paired with the CataTomb tombstone, where the latter has an upgradeable music server that runs on a 2.5GHz Intel processor and a 4G wireless connection, letting the playlists be managed online. This would mean anyone with access can keep you tuned to the latest tracks, now how about that? A 7-inch LCD display will also show the currently playing song, plastered right beside your epitaph. The CataCoffin will retail from €23,500 upwards, and surely looping Justin Bieber tunes would end up in a zombie apocalypse worldwide as the dead arise.
What do you think of such a sombre set up? Do you think of it as gross, as the dead will need to be accorded the proper kind of respect as they are finally laid to rest? Well, I guess there are different strokes for different folks, and sometimes, just sometimes, you can afford to be a wee bit more flamboyant in death. After all, let the kids learn the ropes of life and work hard to earn their own money – you have gone through the school of hard knocks, and deserve a little something fun for all your hard work after you have gone on to the next world.
Source