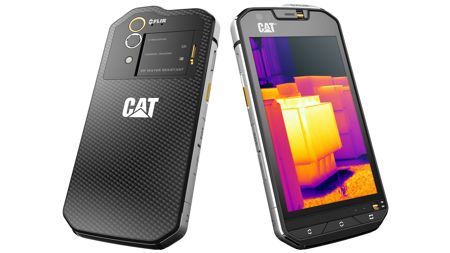 Thermal imaging — now this is a catchword that will certainly evoke a sense of superiority if a particular device carries such a feature. After all, for the moment, the standard bearer of higher end smartphone models would be a fingerprint scanner for security purposes, while an iris recognition system is also starting to catch on for yet another layer of security. The Cat S60 smartphone comes with a very unique idea — that it will carry an integrated thermal camera, now how about that?

The Cat S60 smartphone is touted to be the first smartphone in the world that will sport an integrated thermal camera, now how about that? Not only that, the Cat S60 also carries the boast of being the world’s most waterproof smartphone, which is something that some of us might be nervous to test out in the first place.

The Cat S60 will feature an embedded thermal camera from FLIR, where Cat S60 owners will then be able to make use of their smartphones in a range of cases, including detecting heat loss around windows and doors, spotting moisture and missing insulation, identifying over-heating electrical appliances and circuitry, finding leaks in underfloor heating and seeing through obscurants like smoke. Makes it sound as though you have gained superpowers around the home or at the office, doesn’t it?

Its integrated thermal camera will visualize heat that is invisible to the naked eye, highlighting temperature contrasts. It is so sensitive, it can pick up heat and measure surface temperatures up to a distance of around 30 meters, not to mention to see through obscurants such as smoke.

As for its waterproof capability, the Cat S60 will be so up to depths of up to 5 meters for one hour, which means it is good to bring with you while you are snorkeling. One thing is for sure though, the Cat S60 is not going to be that cheap, but neither will it be out of reach, since an unlocked device will retail for £529.99 a pop. Other hardware specifications include drop proof ability to 1.8m according to MIL Spec 810G, a 4.7″ HD capacitive multi-touch with auto wet finger & glove support, a 3,800mAh battery, a 13MP camera at the back with a 5MP front-facing camera, 4G LTE support, a Snapdragon 617 octa-core processor, 32GB of internal memory and 3GB of RAM, and Android 6.0 Marshmallow in tow.